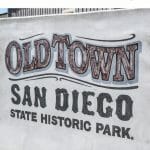 Do you believe in ghosts?

San Diego is known for its magnificent beaches, picture-perfect weather and amazing things to see and explore. But there’s a darker, ominous side to America’s Finest City, renowned for its ghostly happenings. If you are interested in the mystic and ghostly stories of San Diego, you HAVE to go on this Old Town Ghost Tour: Ghosts and Graveyards.

Mysterious occurrences, murders, untimely deaths, and disturbed cemetery plots. It’s no wonder the spirits can’t rest. Ghosts however don’t celebrate holidays. So, Halloween and Day of the Dead isn’t the only time strange manifestations can be experienced.

Wanting to know more about San Diego’s ghastly (or ghostly) history, we booked a 1.5-hour Ghosts & Graveyards Old Town Ghost Tour that introduced us to Old Town’s most notorious haunts. Led by an expert guide, we traveled back in time to learn the historical events contributing to a host of strange occurrences and paranormal activities that have happened here, and continue, even to this day.

Our guide donned black pants, a torn white shirt with religious talismans, a black vest and hat, and carried a shovel. He introduced Old Town’s dark history before we headed to our first stop.

El Campo Santo Cemetery is home to numerous paranormal occurrences. The graveyard, built in 1849, was used until 1880. Though there are 477 bodies buried here, unfortunately not all retained their tomb. Grave markers on the sidewalk and street across from the cemetery mark burial sites now outside the cemetery walls. A streetcar line and road were literally built through the original graveyard boundaries.

Our guide shared tales of several of the unsavory characters of Old Town’s rough and tumble past. Their apparitions are often seen in the cemetery. A man in 19th century garb is said to float above the ground.  It’s reported that alarms from cars parked on the street graves often go off despite no one being near the vehicle.

Just a few blocks from the cemetery, the Whaley House is not only one of the most historic landmarks in the city, but it is also San Diego’s most haunted. Built on the site of former gallows, it has even been dubbed “the most haunted house in America” by Time Magazine and the Travel Channel’s America’s Most Haunted. One of the executed was James “Yankee Jim” Robinson. Sentenced to death by hanging, this tall outlaw slowly strangled to death in a botched execution.

Thomas Whaley purchased the reputedly-cursed property in 1852. Though he personally witnessed Robinson’s execution and others on-site, he was determined to build his house here. Soon after the family moved in, they began hearing heavy footsteps and experienced other strange occurrences. Tragedy after tragedy ensued. The Whaley’s infant sun died of Scarlet Fever and their daughter fatally shot herself in the chest after a failed marriage.

Paranormal activities in the home have continued throughout the years. Former inhabitants of Whaley House have been seen numerous times by workers and visitors alike. Lights turn off and on at will, lamps sway for no reason, and baby cries and footsteps are often heard.

Due to current health restrictions, inside tours of the house have been temporarily suspended. But just walking the grounds while hearing of its troubled past is an eerie experience.

Hopping on a black ghost-mobile trolley, we then headed to Pioneer Park, aka Graveyard Park.  Lanterns in hand, we strolled past massive trees along the grounds to a series of gravestones near a wooded area.

Originally called Calvary Cemetery, the 19th century Catholic burial ground fell into disuse and disrepair over the years. In 1968 the land was donated to the city for a community park. As if the 4,000-plus dead buried here never existed, their headstones were removed and thrown into a ditch. A group in the 80s recovered some of the tombstones and placed them in the park as a remembrance. Later, a large in-ground memorial was added, listing the names of the many deceased still resting here. But are they still resting?

During the day, the park is perfect for picnics. However, it is in the stillness of the night that strange things occur here. The spirit of a woman wanders the grounds confused and disoriented. Orbs have been captured in photos. Residents report flashes of light floating in the park and radios turn on in the middle of the night. Electromagnetic readers brought in by paranormal experts and ghost hunters literally spike off the charts.

As we headed back to Old Town, we all agreed that whether you believe in ghosts or not, the tour is an absolute must-do. For visitors find the previously unknown history of the area fascinating. And guides do an incredible job of setting the mood, and telling the tales of occurrences beyond the grave.

7 Best Temecula Winery Hotels For an Incredible Weekend
Next Post: Parade of Lights San Diego 2022 – Top Tips From A Local