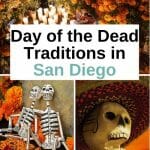 San Diego shares a loving connection to this sacred yet festive celebration. I’ve been to many destinations in Mexico during Dia de Los Muertos and have to say that San Diego’s rendition is among the best.

Each year, Old Town San Diego State Historic Park hosts one of the biggest celebrations of history, culture, and heritage paying homage to this very important and festive tradition. Unfortunately, the City canceled this year’s celebration due to current health restrictions. Typically, Old Town welcomes 75,000 visitors in two days for this event.

But it doesn’t mean the holiday will be ignored by families who’ve long embraced this family tradition. Boutique shops in Old Town and many other San Diego stores carry decorations, tableware, pottery, and home décor to help families celebrate. And just strolling around Old Town, you’ll feel the vibe and energy of this special holiday even today with its festive decorations.

We’re eagerly looking forward to seeing Old Town’s Fiesta de Reyes in all its Dia de Los Muertos glory next year. It’s traditional processional parade, multitudes of displays, craft workshops, entertainment, and festive music are magnificent. In addition, many other neighborhoods of San Diego have their own unique celebrations.

Day of the Dead Traditions

Coinciding with the Catholic holidays All Saints Day and All Souls Day, its origins go back some 3,000 years. The day celebrates generations of family members and friends who died and traveled to Chicunamictlán, the Land of the Dead. Only after getting through nine challenging levels and a journey of several years, does the soul finally reach Mictlán, the final resting place.

Many believe that on this day, the border between the spirit world and the living world dissolves. The souls of the dead (Difuntos), awaken and return to the living world to feast, drink, dance, and play music with their loved ones. But only for 24 hours. Children who have passed come to visit and celebrate as Angelitos.

Day of the Dead Family Traditions

One of the most traditional aspects of the holiday is families building altars in their homes known as ofrendas. These altars include offerings representing earth, water, fire, and wind.

Favorite foods represent the earth. Water, traditionally placed in a clay pitcher reflects the belief that a returning spirit may be thirsty. Candles, incense, and decorative paper represent fire and wind.

Flowers (usually bright marigolds), with their intense color and pungent smell, guide relatives home from the spirit world. Photos of the departed are a centerpiece of the altar.

Families lovingly decorate the burial sites and cemeteries. It is here families gather at cemeteries, with painted faces and candles, placing flowers on the graves of their loved ones. There is no crying or grieving, but rather music and a celebration of the departed’s life.

Traditional foods linked to the holiday include Pan de Muerto (Day of the Dead bread), tamales, pazole, and foods made with spicy mole sauce from recipes passed from generation to generation.

Popular drinks include atole (a corn-based liquor), and of no surprise, tequila. It’s customary to also prepare foods the departed once loved. As my Mexican friend Lena told me “To coax the dead back for a little reunion, tempting them with tacos and tequila certainly can’t hurt.”

The most prominent symbols related to Day of the Dead are calacas (skeletons) and calaveras (sugar skulls). They represent rebirth into the next stage of life. These are typically decorated in a myriad of bright colors with ribbons, bows, and other fancy embellishments.

People commonly wear skull masks, and eat sugar candies molded into the shape of skulls. Even skeleton dolls of all shapes and sizes are colorfully created.

In October 2019, Walt Disney Pictures and Pixar Animation corroborated on the animated fantasy film Coco. The amazing blockbuster tells the story of a young aspiring musician who travels to the land of the dead to find a long lost relative.

The movie provided a colorful, touching, and enlightening look into the holiday. It showed its beloved traditions and opened the eyes of many who previously had no understanding of this sacred celebration of life and death.

Though it’s been commonly believed, Dia de los Muertos is NOT a Mexican version of Halloween. While the two holidays share some traditions, including costumes and parades, they are not the same and have no cultural connection.

It’s fun to see the costumes and sometimes comical representations of skulls and skeletons. Always remember that Day of the Dead celebrations doesn’t laugh at the notion of death or take it lightly.

Instead, they serve to acknowledge death as an inevitable part of life and should be appreciated and celebrated. The Mexican tradition is to honor the generations that came before them. This is why they treat their elderly relatives, in both life and death, with respect.

Mexicans love when others are interested in their culture and want to know their traditions, therefore, asking questions to better understand an event and its traditional practices before partaking in the festivities is wise. The more you understand about this feast for the senses, the more you’ll appreciate Mexico’s most colorful annual event.

Important Facts about Day of the Dead

Dia de Los Muertos is not only celebrated in Mexico and other Latin American countries. There are celebrations in many regions of the U.S. where large Mexican populations reside. In 2008, UNESCO reflecting on the growing awareness of the holiday, and added it to the list of its Intangible Cultural Heritage of Humanity.

Please never ever disturb altars and gravesites. Always treat the Day of the Dead traditions and the families celebrating it with respect. Before taking a photo of an ofrenda, ask the family for permission. Keep in mind it contains photos of the deceased.

“Feliz día de los Muertos” with hopes this story has given some perspective and insight into this amazing holiday. One I have grown to love and respect so very much.