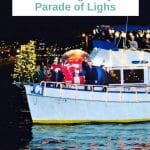 Ahoy, mateys! One of our very favorite December events here in America’s Finest City has always been the magnificent Parade of Lights San Diego. For 51 years, this event has been a favorite for San Diegans and visitors alike and is part of our San Diego Holiday tradition every year. After missing last year, we are so glad the San Diego Parade of Lights is back this year!

It’s time to start planning to light up your holidays and catch the views of lavishly decorated boats cruising the San Diego harbor. It’s not only a longstanding favorite San Diego Holiday event, but it’s also a ton of fun!

Dates: Sunday, December 11 & 18, 2022
Time: 5:30 PM (but come at least a few hours early to get a good spot)
Location: San Diego Bay (see below for best viewing spots)
How many boats: Approximately 80 boats
How long is the parade? It takes about 1 hour for the parade to pass through.
How many spectators attend? Split up over 2 Sundays, the event attracts approximately 100000 visitors each year.

North County residents: If you can’t make it to the San Diego Parade of Lights, check out Newport Beach for their Holiday Boat Parade of Lights. Book your tickets here>> And if you want to experience it from the water, you can even do a Holiday Lights Cruise!

History of the San Diego By Parade of Lights

Since 1969, spectators have been wowed by this iconic time-honored holiday tradition presented by the Port of San Diego. The San Diego boating community sports vessels of every size and shape take to the night waters of our magnificent bay.

Boats come dressed to the nines with colorful lights, decorations, costumes, and music to fits each show’s yearly theme. Accompanied by the twinkling lights of the city skyline, the parade makes for a magical evening- one to share with family and friends.

A variety of prizes and awards are presented to the best-decorated boats and those best capturing the parade’s theme. However, as one Coronado participant exclaimed “We have so much fun just getting together to decorate our boat. We love the smiles and cheers from the crowd watching from the shoreline. Heck, I’d have bought a boat just to participate in this event.”

This holiday tradition has become so popular that it attracts more than 100,000 residents and visitors to multiple locations surrounding the waterfront. They come in droves to celebrate and enjoy the spectacle of more than 80 dazzlingly decorated and illuminated boats.

Participating in the Parade

Boat owners hoping to join the parade may register online. A $75 registration fee covers both nights of the parade, increasing to $100 after November 26.

Those who want to be on the water but not enter a boat in the parade can offer to be a ‘stake boat.’ These dedicated volunteers help marshal the parade along its predetermined route.

Past themes of the parade have included “Comic-Con on the Bay,” “Tropical Island Christmas,” “Arrgh! A Pirates Christmas” and other enchanting and entertaining motifs and concepts.

Our 2022 theme celebration is yet to be announced and we will share it as soon as we hear it!

As in previous years, the 2022 Parade of Lights San Diego will be held on consecutive Sunday evenings. Mark your calendars for December 11th and 18th. The event is absolutely free for spectators wishing to view the parade from various locations along the waterfront. The procession begins at 5:00 pm and runs approximately 1.5 to 2 hours, depending on the number of boats participating.

Beginning at Shelter Island, the parade route follows a predetermined course past Harbor Island, heading south along the Embarcadero, cruising by Seaport Village and Cesar Chavez Park before turning parallel with the Coronado Bridge to the west side of the bay. The parade then proceeds along Coronado Island, finishing at Ferry Landing.

How to Get to the Parade

Due to increased traffic and the number of visitors the parade attracts, attendees are encouraged to utilize San Diego Public Transit, like the San Diego Trolley. All three trolley lines and bus lines provide drop-offs within a short walk of Harbor Drive. On Sundays, two children ages 12 and under ride free with each paid adult ticket. Transportation schedules and additional information are available on the Metropolitan Transit System website here.

Another fun option is to park downtown and hop on a Pedicab for transportation to the Embarcadero.

Those choosing to drive in should plan to arrive early as parking is limited both bayside and Coronado. Metered spaces are available along Harbor Drive, the parking lot of the Fish Market Restaurant north of Seaport Village, Harbor Island, and Shelter Island. Seaport Village and Allright Parking (at the corner of Broadway & Harbor) also offer paid parking.

Where to View the Parade

Landlubbers have several options for viewing the parade. These include Shelter Island, Harbor Island Park, The Embarcadero, Seaport Village, the Pier at Cesar Chavez Park, and the Coronado Ferry Landing. The website includes a map of the route and a viewing timeline of the parade procession. Announcers will share details about the boats at three locations: Maritime Museum, Embarcadero, and Ferry Landing.

December evenings in San Diego can sometimes get chilly. So, your best bet in dressing for the parade is to check the weather forecast and then layer accordingly. Some years we’ve been in shorts with just a sweatshirt, others we needed both gloves and scarves!

Once again, plan to get to viewing spots early as these tend to fill up very quickly, especially along the Harbor Island area. Pack a comfy chair, bring a warm blanket, fill a cooler with food and drinks (on cool nights it’s great to have a thermos of coffee or hot chocolate), and head to one of several viewing spots along the waterfront. A wagon also works wonders for hauling all the above items you’ll want for an evening of fun and enchantment!

Viewing the Parade of Lights from Waterfront Restaurants

Here’s an option we didn’t even think about until a few years back —making a reservation to dine at one of San Diego’s waterfront restaurants along the parade route.  They do fill up early, so, you may want to consider booking NOW.

Here are a few to check out:

Let the magic of a thousand lights gleaming off the water from festive boats bring joy to your holiday season.

Parade of Lights San Diego was written by Noreen Kompanik for SanDiegoExplorer.

Last Updated on December 10, 2022 by sandiegoexplorer

Scary! Old Town Ghost Tour: Ghosts and Graveyards
Next Post: Where to Find the BEST Thanksgiving Dinner in San Diego To Go