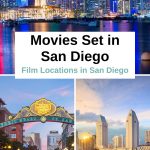 There’s something exciting about visiting the sites where some of our favorite movies were filmed. Perhaps it makes us feel a more live and personal connection to the picture. Or even just a fun piece of “did you know?” trivia to share with friends.

As we know, San Diego is blessed with fabulous weather, stunning sunsets, a picturesque waterfront, and of course, San Diego is a Navy town. So, it’s no wonder that hundreds of Hollywood films were made here.

Let’s look at some of these most popular, fabulous, fun, and fascinating movies filmed in San Diego, and explore the locations where they were shot. Lucky for us, they are places where we can still walk in the footsteps of the stars like Tom Cruise, Marilyn Monroe, Will Farrell, and famous filmmaker, Orson Welles. And the best part? They are free to visit!

Kansas City Barbeque in downtown San Diego was the setting for the scene with Anthony Edwards bashing out “Great Balls of Fire” on the piano, along with his co-stars Meg Ryan and Kelly McGillis.

The intersection of West Laurel and Union Streets in Bankers Hill was the movie location where Charlie (McGillis) chases down Maverick (Cruise) on his motorcycle. As you go up the hill, you’ll see the massive palm tree on the right where the scene was filmed.

Point Loma Coast Guard Lighthouse located on the tip of Point Loma was the location of Viper (Tom Skerritt’s house) in the movie. Though the lighthouse isn’t accessible to the public, you can see it looking down from the Cabrillo Monument. From this vantage point, views of the city, San Diego Bay, the navy base, and even all the way to Mexico on a clear day are spectacular.

Who hasn’t heard of the beautiful blond Marilyn Monroe? She and co-stars Jack Lemmon and Tony Curtis got to work, hang out, and enjoy the magnificent surroundings of the 1888 historic Hotel del Coronado while filming the 1958 classic comedy, Some Like It Hot.

The quintessential and legendary beach resort’s walls are filled with old photos of the stars taken while the movie was being filmed. Adjacent pictures feature foreign dignitaries, royalty, and other celebrities– all previous distinguished guests of The Del.

All exterior scenes of the resort and the Coronado Municipal Beach were filmed on location. Visitors to the Hotel Del can still stand on the same beach and take in the same views of the Pacific Ocean and the hotel as once did these famous stars.

Considered by many critics to be one of the greatest films ever made, Citizen Kane, the 1941 classic drama was filmed in numerous locations throughout Balboa Park. The story was based on several real-life characters, most notably, newspaper tycoon William Randolph Hearst.

Most of the pictures of Kane’s Florida estate called Xanadu in the film are a montage of shots of Balboa Park’s “El Cid” equestrian statue, the San Diego Museum of Art, Museum of Man with its California tower, and the picturesque reflecting pond. As if we need a reason to go back to this stunning location, it’s even more fun to watch this classic film and then visit Balboa Park for the real deal!

Disney’s 1976 comedy classic Freaky Friday, starring Jodi Foster, depicts a mother and daughter who’ve swapped bodies and now have to find a way to switch back.

Much of the movie was filmed on Mission Bay due to its beautiful scenery, natural lighting, and of course, the bay itself. A water-skiing competition at the conclusion of the movie is where the two personalities revert back to their normal selves.

Ocean Beach is one of San Diego’s more laidback communities with a 1970s hippie vibe– the perfect setting for the 2000 award-winning comedy-drama flick, Almost Famous. The film tells the story of a coming of age teenage journalist reporting on a rock band called Stillwater, based on the real-life Allman Brothers.

The screenplay was written by former San Diegan Cameron Crow who had been a teenage writer for Rolling Stone and former music critic for the San Diego Union Tribune. Filming took place at the former San Diego Sports Arena and of course, the famed Newport Avenue in the nearby community of Ocean Beach.

Attack of the Killer Tomatoes – San Diego Harbor and UCSD

UCSD alumni may get some feelings of déjà vu while watching the 1978 mockumentary, Attack of the Killer Tomatoes. The cult classic is a spoof on B-rated movies depicting mutant tomatoes revolting against humanity. The movie was filmed entirely in San Diego and scenes included the university’s parking lot and administrative buildings.

The Majestic Star of India, the world’s oldest merchant sailing vessel still in operation and located in the picturesque San Diego Harbor also played a role in the film.

An award-winning film starring Michael Douglas, Catherine Zeta-Zones, Benicio Del Toro, and an international ensemble cast, Traffic is based on the escalating war on illegal drugs and cross-border trafficking.

Who can possibly forget these two crazy funny films starring Will Farrell as San Diego anchorman Ron Burgundy? Only, according to Ron, it’s pronounced “San-dee-ahh-go!”

The first Anchorman film included only aerial shots of the downtown. However, the 2013 second movie’s filming sites were more expansive, including Balboa Park, the world-famous San Diego Zoo, and the stunning San Diego waterfront.

Much of the 2003 movie Bruce Almighty starring Jim Carrey was filmed on the East Coast. However, the directors realized that the flick about a man who’s been given almighty powers to rule the world needed some additional scenes. So, off the cast and crew headed to the West Coast to capture the film’s night scenes on San Diego’s Harbor Island.

Interestingly enough, the film crew had to work with local leaders and businesses to ensure holiday and harbor lights were all shut off during shooting.

When all is said and done, we San Diegans can understand why filmmakers chose American’s Finest City as settings for their movies. For our benefit, we know it’s super good for the economy, and as local residents it’s fun to claim bragging rights to these many iconic locations.

Movies filmed in San Diego was written by Noreen Kompanik for SanDiegoExplorer.com.

10 Best San Diego Wineries You MUST Try If You Love Wine
Next Post: Best Things to Do in San Diego – Ultimate Guide by A Local