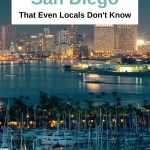 21 Fun Facts About San Diego You May Not Know

An unknown author once said “Let life surprise you.”

We all love America’s Finest City, and if someone would ask the locals to recommend places to go and things to see in San Diego, we could easily rattle off an almost-endless list.

But it’s also super entertaining to find those surprising and fascinating fun facts about San Diego – the places and things that aren’t as well known. They’re guaranteed to be great conversation starters!

The breathtaking San Diego-Coronado Bridge became an iconic landmark the moment it opened in August, 1969 during San Diego’s bicentennial. The first person to drive across the span was then-California Governor Ronald Reagan.

Theodor Geisel aka Dr. Seuss was a longtime resident of La Jolla. He not only loved his magnificent town, but it literally inspired “Whoville” in his legendary tale.

A visit to Legends Gallery in La Jolla that carries a substantial collection of his work even provided another surprise. Lesser-known works from the children’s’ books author include fascinating adult-themed artwork and eclectic sculptures.

The iconic Horton Grand Hotel in the Gaslamp was once home to notorious Wild West gunslinger Wyatt Earp and his third wife, Josephine. Known as the deadliest man in the Old West.

Earp came to San Diego around 1887 on the lookout for the next big moneymaker, the railroad, and lived the entire time at the Horton Grand. It was here he ran three gambling halls in an area where saloons and brothels were common fixtures in the area. It was definitely an interesting part of San Diego’s history.

Another fun fact about this San Diego hotel: It supposedly is one of the most haunted places in the world.

Wizard of Oz in San Diego

L. Frank Baum, author of the “The Wonderful Wizard of Oz” made The Hotel del Coronado a wintertime respite for six years while writing more books in his Oz series.

He also rented out a historic home on Star Park Circle. Baum was so enchanted with Coronado that he penned a poem about it called “Coronado: The Queen of Fairyland.”

Cuisine at Dobson’s Bar and Restaurant located near Horton Plaza is phenomenal and one of the best restaurants in San Diego. But the restaurant also has some interesting tales to tell. The bar, once called the Press Room, was long filled with cigarette and cigar smoking reporters from the Union-Tribune. Seated at the bar, these stalwart newsmen could view the correct time reflected in the mirrored wall straight ahead.

Grammy-award winning singer-songwriter Jason Mraz not only entertains us with his laid-back, melodic and stylistic songs, but he and his family own a 5.5- acre avocado farm near Oceanside.

At any given time 150,000 to 350,000 bees in several hives produce honeycomb used in the hotel’s restaurant, local breweries, and distilleries.

San Diego County wines are garnishing top awards at some of the top U.S. wine competitions. But, did you know that San Diego actually has 14 women winemakers?

These amazing ladies are not only shaking up the world of winemaking, but most of these pioneers, trailblazers, and stereotype breakers don’t even come from a winemaking background.

San Diego has a Chinese Museum

From railroad building and gold mining to dominating the laundry industry, the Chinese community played a tremendous role in San Diego’s storied past.

The San Diego Chinese Historical Museum is located in the heart of the Gaslamp Quarter. Its mission is to collect, preserve, and display documents, artifacts, and photographs relevant to the Chinese and Chinese-American experience.

How Orange Avenue Got Its Name

Orange Avenue in Coronado runs through the center of town leading to Coronado’s crown jewel, the Hotel Del Coronado. But we wondered why it’s called Orange Avenue.

Old photographs from the Coronado Times reveal that in 1887 orange trees lined the road. Two years later, however, the city removed them as the jackrabbits munched the trees to destruction.

“What’s your name?” asks Chadwick, a white cockatoo at the Polynesian-inspired Catamaran Resort and Spa in Pacific Beach. He is one of six beautiful parrots that live in the Hotel. They have been part of the hotel “staff” for years. We could stand there for hours watching their antics and pranks.

An old adage “the squeaky wheel gets the grease” has been around for years. But we no longer needed the grease after WD-40 was invented in San Diego in 1953 by the Rocket Chemical Company.

The team of inventors was working on a line of industrial rust-prevention solvents and degreasers for use in the aerospace industry where the WD-40 was first used to protect the outer skin of the Atlas Missile from rust and corrosion.

We all know that San Diego is a Navy town, but it’s also the birthplace of Naval Aviation. Glen Curtiss, an aviation pioneer flew the first seaplane from the waters of San Diego Bay in 1911. The following day, Lt. Ellison became the first-ever U.S. naval aviator. North Island was officially commissioned a Naval Air Station in 1917.

Taking a Ride on The Giant Dipper

Belmont Park’s 95-year old wooden roller coaster, The Giant Dipper, is one of only four roller coasters in the world on the National Register of Historic Places. Built in 1925, it’s only one of two remaining wooden coasters found on the West Coast.

Originally founded in 1889 by five Sicilian immigrants, Bernardo Winery is the oldest continuously operating winery in Southern California. How did this winery survive when so many went belly up during prohibition? According to Rossi Rizzo, fourth-generation family winemaker “The family made sacramental wines. After all, churches needed it to give communion.”

In 1948, California school teacher Eleanor Abbott created this popular children’s game while in a local hospital with polio. Surrounded by children suffering with the same affliction, she imaginatively invented a game that would entertain them during a painful, lonely time in their lives.

She pitched the game idea to toy manufacturer Milton Bradley, and today Candy Land continues to be a number one best seller and a beloved favorite of young children worldwide.

San Diego has produced and delivered more shows to Broadway than any other city in America. All thanks to two of our local theatres, La Jolla Playhouse and Old Globe in Balboa Park who’ve provided more than 50 productions to New York’s iconic theater district.

If you’ve ever enjoyed Tony Award-winning shows like Jersey Boys, The Full Monty, and Thoroughly Modern Millie, you can smile and know they originated from our very own home town.

Though she was a fictitious kitchen-expert created in 1921 to answer cooking correspondence, Betty Crocker, the first lady of food, acquired a voice in 1924. Her name was Agnes White, a home economist who lived in an 1883 Victorian home on 140 acres in Valley Center.

She was the guiding presence in American homes with the nation’s first radio cooking show and wrote the initial Betty Crocker cookbook in 1950. The historic home, located in Valley Center is now owned by Marlise and Benjamin Myers who christened their project Brick N Barn and plan to turn Agnes’ test kitchen into a museum.

Tin Man and the Wizard of Oz

One of Valley Center’s other notable residents according to Valley Center History Museum records is Jack Haley, who portrayed the Tin Man in the Hollywood movie, the Wizard of Oz.

Interestingly enough, he wasn’t the first choice to play the beloved character. Famous actor Buddy Ebsen initially had the role, but had to turn it down the part because of allergies to the metal costumes. Thank goodness Haley had a “heart” and gladly filled in as the Tin Man. And, the rest as they say, is history.

Kudos to the Farming Life

San Diego has farms. Lots of farms. As a matter of fact, more than any other county in the U.S. With over 6,500 along with almost 350 organic-produce growers, we have a lot to crow about!

The diversity of microclimates allows San Diego to grow strawberries along the coast, apples in the mountains, and date palms in the desert. And we’re the nation’s top producer of avocados, ranking third in honey production, fifth in lemons, ninth in strawberries, and tenth in the number of egg-laying hens.

Get Locked Inside an Old Town Jail Cell

Old Town has a Sheriff’s Museum with antique police vehicles and aircraft, items made by inmates, and multiple exhibits, including one on San Diego’s bizarre Heaven’s Gate Cult.

This religious sect combined its apocalyptic Christian beliefs with strange UFO themes. In 1997, police discovered 39 cult members had committed mass suicide in their rented Rancho Santa Fe mansion. If that’s not creepy enough, you can also ask to get locked in a cell at the sheriff’s museum… for a photo op, of course. Just hope they don’t lose the key.

Are you from San Diego? How many of these fun facts about San Diego did you know?

Best Things to Do in San Diego – Ultimate Guide by A Local
Next Post: Weekend in San Diego: Plan the perfect San Diego Getaway